A Virtual Launch Event: Testifying to the Truth Digital Resource and Panel Discussion

We are delighted to announce the upcoming publication of our new digital resource, Testifying to the Truth. This online database shares eyewitness accounts from the Holocaust, many of which have never been available to the public online before and have been translated, by a team of the Library’s volunteers, into English for the first time. 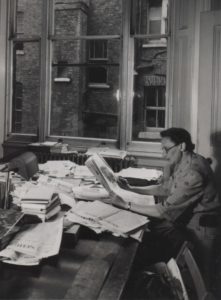 In the 1950s, Dr Eva Reichmann, the Library’s Director of Research, embarked on an ambitious effort to collect eyewitness accounts from those who had lived through the Holocaust. Over the course of seven years, this initiative resulted in the gathering of more than 1,300 written reports in seven different languages. The launch of the first 380 translated and digitised accounts will see the work started by Dr Reichmann in 1945 made fully accessible to the public. The rest of the 1,185 testimonies will be released later this year.

Chaired by Dr Toby Simpson, the Director of The Wiener Holocaust Library, the panellists discussed the history of the collection, the context of early Holocaust testimonies, the significance of the collection for scholarship, and the project of translation:

We are thankful to the Ministry for Housing, Communities and Local Government whose support has enabled us to widen the access to this unique collection.