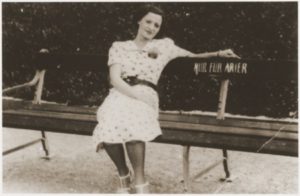 Lizi Rosenfeld on a park bench with a sign ‘Only for Aryans’, August 1938, Vienna

Part of the Library’s Jewish Resistance to the Holocaust event series.

Jewish resistance during the Holocaust is largely understood as rare armed group activities in the Nazi-occupied East, for example, ghetto uprisings or partisan activities. By contrast, this talk focused on forgotten individual acts of resistance, like the case of Hertha Reis, who protested in plain daylight against the persecution in 1941, a few months before the mass deportation started in the capital of the Third Reich. She exclaimed in front of the Berlin courthouse “We lost everything. Because of the damned government, we finally lost our home, too. This thug Hitler, the damned government, the damned people. Just because we are Jews, we are discriminated against.”

Based on a new approach and using new sources, as logbooks of Berlin police precincts, trial materials from various German cities as well as video testimonies of survivors, the talk demonstrated how Jewish women and men performed countless acts of resistance in Nazi Germany proper between 1933 and 1945. The examples that this nearly ten-year research unearthed demonstrated that Jews reacted not only to well-known national laws, but also to anti-Jewish restrictions and violence at the local level. Jewish women and men of all ages and from all educational and professional backgrounds defied Nazi measures or raised their voices in protest. They developed changing response strategies over time: first against Nazi propaganda and exclusionary economic measures, later against violent local attacks and municipal restrictions as well as the nationwide November pogrom and radical segregationist laws, and finally against forced labour and deportation.

The fact that German Jews protested in public and that so many defied Nazi measures obliterates the common view of passivity on the part of the persecuted. Thus, this research gives agency back to ordinary Jews in extraordinary circumstances. Many German Jews evolve as historical actors who resisted oppression. However, their courageous acts still wait to be incorporated into the general narrative of the persecution of the Jews in Nazi Germany.

Professor Gruner holds the Shapell-Guerin Chair in Jewish Studies, is Professor of History at the University of Southern California, Los Angeles since 2008 and is the Founding Director of the USC Shoah Foundation Center for Advanced Genocide Research since 2014.

He is the author of ten books on the Holocaust, among them Jewish Forced Labor under the Nazis. Economic Needs and Nazi Racial Aims, with Cambridge University Press (paperback 2008). His prizewinning book The Holocaust in Bohemia and Moravia. Czech Initiatives, German Policies, Jewish Responses (Berghahn 2019) was originally published in German with Wallstein (2016). It was translated into Czech (2019) and is forthcoming in Hebrew with Yad Vasehm (2021). Most recently, Gruner coedited: With Steven Ross, New Perspectives on Kristallnacht: After 80 Years, the Nazi Pogrom in Global Comparison (Purdue University Press 2019); and with Thomas Pegelow-Kaplan, Resisting Persecution. Jews and their Petitions during the Holocaust (Berghahn 2020).

He is currently finishing the manuscript of an exciting book about forgotten acts of individual defiance, protest and resistance of German and Austrian Jews during the Holocaust.