This event marks the recent publication of two important contributions to our understanding of violence committed in the British Empire. These works challenge traditional understandings of th 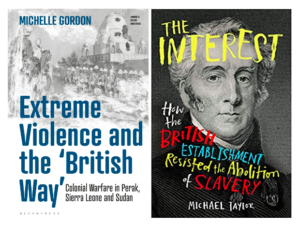 e extent of colonial violence and the process of the abolition of the slave trade in the British Empire.

Michelle Gordon’s book, Extreme Violence and the ‘British Way’: Colonial Warfare in Perak, Sierra Leone and Sudan (Bloomsbury 2020), explores the commonalities in colonial warfare in Perak, Sierra Leone and Sudan. Gordon highlights the significance of decision-making processes, communication between London and the periphery and the influence of individual colonial administrators in outbreaks of violence. Michael Taylor’s The Interest – How the British Establishment Resisted the Abolition of Slavery (Bodley Head 2020) explores how nearly every leading figure in the British establishment ensured that slavery – which had been outlawed by Parliament in 1807 – survived until 1833. When abolition finally came, compensation was given not to the enslaved but to the slaveholders, entrenching the power of their families to shape modern Britain to this day.

This conversation with the authors will explore the themes raised in their books and also examine why the issues of colonial violence and the abolition slavery in the British Empire have been misrepresented in traditional historiography and in British historical memory of the British Empire.

Dr Gordon is a researcher at the Hugo Valentin Centre, Uppsala University. She currently heads the research project “The ‘Civilised’ Nature of Nineteenth-Century Warfare? British and German Practices of Violence in Colonial and Intra-European Wars”, funded by the Swedish Research Council. She holds a PhD in History from Royal Holloway, University of London. Gordon has specific research and teaching expertise in studies of genocide and mass violence, with a focus on the British Empire.

Praise for Extreme Violence and the ‘British Way’:

‘This important book shows that rather than constituting an occasional ‘excess’, extreme violence was a characteristic trait of Britain’s empire.’ Donald Bloxham, Richard Pares Professor of History, University of Edinburgh

Buy a copy of Extreme Violence and the ‘British Way’ here.

Dr Taylor is a historian of colonial slavery, the British Empire and the British Isles. He graduated with a double first in history from the University of Cambridge, where he earned his PhD – and also won University Challenge. He has since been Lecturer in Modern British History at Balliol College, Oxford, and a Visiting Fellow at the British Library’s Eccles Centre for American Studies.

Praise for The Interest:

‘Fascinating … riveting and first-rate’ The Times

Buy a copy of The Interest here.