Antisemitism on Social Media https://www.routledge.com/Antisemitism-on-Social-Media/Hubscher-Mering/p/book/9781032059693, published in March 2022 by Routledge, is a book for all who want to understand this phenomenon. 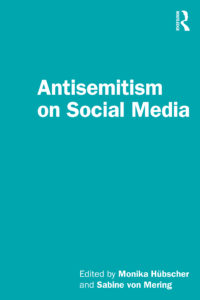 The interdisciplinary volume addresses how social media with its technology and business model has revolutionised the dissemination of antisemitism and how this impacts not only victims of antisemitic hate speech but also society at large. The book gives insight into case studies on different platforms such as Twitter, Facebook, TikTok, YouTube, and Telegram. It also demonstrates how social media is weaponized through the dissemination of antisemitic content by political actors from the right, the left, and the extreme fringe, and critically assesses existing counter-strategies.

Monika Hübscher is a PhD Candidate at the Haifa Center for German and European Studies at the University of Haifa, Israel, and Research Associate at the project “Antisemitism and Youth” at the University of Duisburg-Essen, Germany.  She researches and lectures on antisemitism, hate speech and disinformation on social media, and social media literacy.

Sabine von Mering, Ph.D. is Professor of German and Women’s, Gender, and Sexuality Studies, a core faculty member with the Environmental Studies Program, and Director of the Center for German and European Studies (CGES) at Brandeis University in Waltham, Massachusetts, USA. Her prior co-edited volumes include Right-Wing Radicalism Today: Perspectives from Europe and the US with Timothy Wyman-McCarty (2013), Russian-Jewish Emigration after the Cold War: Perspectives from Germany, Israel, Canada, and the United States with Olaf Gloeckner and Evgenija Garbolevsky (2006).

Jakob Guhl is a Manager at the Institute for Strategic Dialogue (ISD), London, UK. His research focuses on the far-right, Islamist extremism, hate speech, disinformation and conspiracy theories. He is a frequent commentator on German radio and broadcast. He has been invited to present his research about online hate to the German government.

Armin Langer, Ph.D. is a Visiting Research Scholar at the Schusterman Center for Israel Studies at Brandeis University in Waltham, MA, USA. He holds a PhD in Sociology from the Humboldt University of Berlin and rabbinic ordination by the Reconstructionist Rabbinical College in Philadelphia. He is author of two monographs, editor of an anthology and several articles on antisemitism, Islamophobia, integration and migration in Europe, including “The eternal George Soros: rise of an antisemitic and Islamophobic conspiracy theory,” in A continent of conspiracies (Routledge, 2021) and “Dog-whistle politics as a strategy of the US American alt-right,” in Nationalism and Populism (De Gruyter, 2022).

This will be an online only event.