Home Events Being Human 2021 – Fate Unknown: The Search for the Missing after the Holocaust

Being Human 2021 – Fate Unknown: The Search for the Missing after the Holocaust

This is an in-person event taking place at the Linen Hall Library in Belfast. 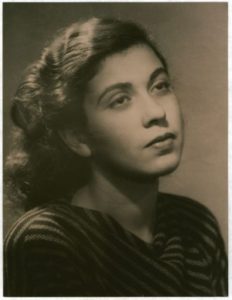 Missing since September 1943, Zuzana Knobloch, a young Czech Jew, was arrested in Prague with her husband, Ferdinand, for resistance activities. Zuzana’s parents were murdered after being deported from Theresienstadt in 1942. It took her surviving family many decades to uncover her likely fate. Wiener Holocaust Library Collections.

This two-day event series will discover the history of a little-known archive, the International Tracing Service (now called the Arolsen Archives), created to find missing people after the Holocaust. We invite historians, family historians, heritage practitioners and anyone interested in the history of the Second World War, the Holocaust and its aftermath to participate and reflect on the legacies of confronting difficult histories, both on the personal and broader, historical level. Find out more about the series here.

A pop-up exhibition, drinks reception and talks on the history of the search for the missing after the Second World War with co-curators Professor Dan Stone and Dr Christine Schmidt, led by Scott Edgar, Assistant Arts and Cultural Programmer. The history of the collection and what it reveals about the Second World War helps provide context for research, both family and academic, within the archive itself. The discussion will include themes raised by the exhibition, including war, migration, rupture, survival and victimhood.

Booking is essential as spaces are limited due to ongoing COVID-19 restrictions. Pending easing of restrictions, additional spaces may open close to the event. The Linen Hall Library is an accessible building with a lift to all levels, step-free access to the Performance Area, and seats available for the event.

This event is part of the Being Human festival, the UK’s only national festival of the humanities, taking place 11 – 12 November 2021.

In partnership with the Linen Hall Library, the Holocaust Research Institute, Royal Holloway, University of London and The Wiener Holocaust Library.