Join us to hear author Simon Parkin speak about his new book, The Island of Extraordinary Captives: A True Story of an Artist, a Spy and a Wartime Scandal. Using exclusive new archive material, letters and diaries, it reveals the untold story of history’s most extraordinary prison camp, where Britain interned thousands of refugees during the Second World War. 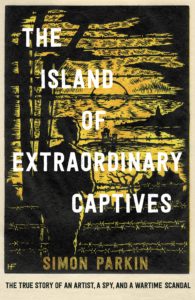 Approximately 73,500 German and Austrian refugees from Nazism fled to Britain when war broke out. Initially, these refugees were received under such lauded schemes as the Kindertransport. But in the following months, the British media stoked national paranoia that a network of spies, posing as refugees, lurked among their ranks. The British government embarked upon a policy of mass internment of the very same people they had welcomed to our shores, and of the so-called ‘enemy aliens’ living in Britain, approximately 30,000 were sent to camps indefinitely. On 13 July 1940, Hutchinson Camp on the Isle of Man was declared open. Home to around 1,200 prisoners, by a twist of fate their number included some of the most prominent and celebrated German and Austrian artists, musicians and academics of the day, such as the pioneering German Dadaist Kurt Schwitters, Ludwig Meidner (Artist), Paul Hamann (Artist), Fred Uhlman (Artist), Gerhard Bersu (Oxford archaeologist), Heinrich Fraenkel (author, journalist, chess-setter for New Statesman), Fred Weiss (film director), and Leo Wurmser (Conductor for BBC orchestras etc). The Austrian politician Emil Maurer survived not one but two Germany camps – Dachau and Buchenwald – only to be sent to the Isle of Man by his supposed saviours. Other internees, like the orphan and aspiring artist Peter Fleischmann, were barely out of school, but found among the eminent men a community that would forever change their lives.

Simon Parkin is an award-winning British writer and investigative journalist. He is the author of A Game Of Birds And Wolves, which told the little-known story of a small group of women in Liverpool who devised a war game which went on to be the thing that won the Battle of the Atlantic and has been bought for film by Steven Spielberg. He lives in West Sussex.

We regret to inform visitors that our exterior lift is currently out of service. This is due to ongoing repair works and we apologise for the inconvenience. If you have any comments, questions, or concerns regarding accessibility at the Library, please email us at [email protected] or call us on +44 (0) 20 7636 7242