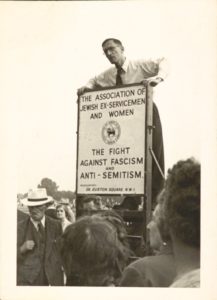 Part of the Library’s Fighting Antisemitism from Dreyfus to Today exhibition events series.

In this talk, the curator of The Wiener Holocaust Library’s latest exhibition will discuss the genesis of the exhibition project and the process of curation. She will explore some of the key documents, photographs and artefacts on display in the exhibition, including rare printed materials relating to the Dreyfus affair from France in the 1890s; pamphlets produced in Weimar Germany refuting Nazi antisemitic ideas; documents and photographs collected by the Library’s predecessor organisation in the 1930s highlighting the antisemitic policies of the Nazi regime; photographs documenting the work of Jewish anti-fascist street speakers in East London in the 1950s, and a tool kit designed to help those seeking to campaign against the BNP in elections in Britain.

Dr Barbara Warnock is the Senior Curator and Head of Education at The Wiener Holocaust Library.