Join us as we launch our first, co-located exhibition Death Marches: Evidence and Memory. 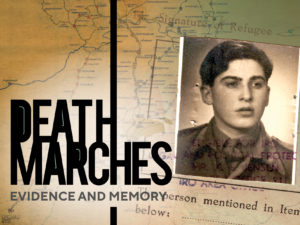 Towards the end of the Second World War, hundreds of thousands of prisoners still held within the Nazi camp system were forcibly evacuated in terrible conditions under heavy guard. Prisoners were sent out on foot, by rail, in horse-drawn wagons, in lorries and by ship. Thousands of people were murdered en route in the last days before the war’s end. Many of these chaotic and brutal evacuations became known as ‘death marches’ by those who endured them. They form the last chapter of Nazi genocide.

The Holocaust and Genocide Research Partnership is pleased to launch its inaugural exhibition, co-curated by Dan Stone (RHUL) and Christine Schmidt (WHL), and on display in 2021 at The Wiener Holocaust Library and the Holocaust Exhibition & Learning Centre at the University of Huddersfield.

The exhibition uncovers how forensic and other evidence about the death marches has been gathered since the end of the Holocaust. It chronicles how researchers and others attempted to recover the death march routes – and those who did not survive them. Efforts to analyse and commemorate the death marches continue to this day.

The launch event will include a gallery walk-through, short talks by the co-curators and other guest speakers.