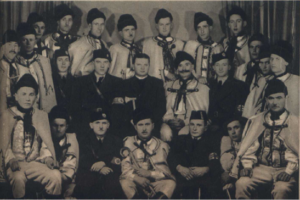 Part of the This Fascist Life exhibition event series.

Calling someone a fascist during the interwar period meant first and foremost associating them with movements, leaders, or regimes that embraced that name, or which other people commonly thought were fascist. Labels like ‘fascist’ were useful for activists seeking funding or alliances abroad, for opponents trying to identify their enemies as fifth columnists, or as a shorthand way to highlight key attributes of a movement. But in the day-to-day bustle of politics those groups generally considered as fascist often had more in common with right-wing or ultra-nationalist parties in their own countries than with comparable groups abroad. Activists and hostile observers alike acknowledged that certain commonalities animated movements and regimes, but they were often remarkably ambivalent about whether particular movements were or were not ‘fascist’.

In this talk, Roland Clark and Tim Grady approach the word ‘fascism’ as an empty signifier that was defined by its relationships rather than its content, grounding it in the transnational, pan-European context within which it emerged. By drawing together examples of what people meant by fascism from a variety of countries across the continent, we offer a promising new way of thinking about what fascism was in interwar Europe.

Roland Clark is Senior Lecturer in Modern European History at the University of Liverpool and the Principal Investigator on the European Fascist Movements 1919-1941 project and co-curator of the This Fascist Life exhibition. He is a Senior Fellow with the Centre for Analysis of the Radical Right and President of the Society for Romanian Studies and the author of Holy Legionary Youth: Fascist Activism in Interwar Romania (2015).

Tim Grady is Professor of History at the University of Chester and the Co-Investigator on the European Fascist Movements 1919-1941 project and co-curator of the This Fascist Life exhibition. He is the author of A Deadly Legacy: German Jews and the Great War (2017) and The German-Jewish Soldiers of the First World War in History and Memory (2011).