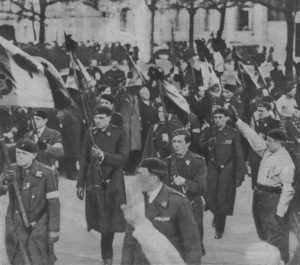 On 6 February 1934, thousands of extreme right-wing activists and war veterans gathered in Paris to protest against the alleged corruption of the left-wing government. The demonstration soon turned violent as protesters attempted to force their way into parliament. Over a dozen deaths resulted when police opened fire on the crowd, eventually putting an end to the riot. For the French extreme right, 6 February 1934 was a turning point, after which hundreds of thousands of French joined anti-democratic movements. For left-wingers, France had narrowly escaped a fascist seizure of power and the time had come to form a united front against French fascism.

In this lecture, Dr Chris Millington will explore the origins and consequences of the violence, including the various fascist movements in French politics. He will also draw comparisons with contemporary political events and examine what lessons might be learned.

Chris Millington is Reader in Modern European History at Manchester Metropolitan University. He has written extensively on the history of the French extreme right and violence. His publications include Le Massacre de Clichy (2021), France in the Second World War (2020) and A History of Fascism in France (2019).

Please note that attendee numbers have been capped below full capacity for this event.

In order to keep everybody safe, attendees are encouraged to take a lateral flow test before arriving, check-in via the NHS Covid-19 App, and wear a mask whilst inside the Library.

Please use the hand sanitisers available throughout the building. To improve ventilation, windows will be opened by staff, including in cooler weather.

We continue to closely monitor the situation with respect to the COVID-19 pandemic, and as such, our regulations are under constant review and might change at short notice. The safety and wellbeing of all our staff and visitors are of paramount importance and we thank you for your patience and understanding.