Home Events Virtual Exhibition Talk: The Radicalising Impact of the Fascist Past: Emotive Memories of Nazism and Fascism in Contemporary Extreme Right Politics

Virtual Exhibition Talk: The Radicalising Impact of the Fascist Past: Emotive Memories of Nazism and Fascism in Contemporary Extreme Right Politics

As part of The Wiener Holocaust Library’s This Fascist Life exhibition series, Professor Paul Jackson will explore how the extreme right today, in Britain and internationally, often takes a deep interest in the fascist past. 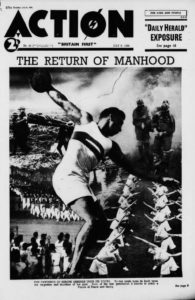 While the more moderate populist radical right has tried to disconnect itself from the legacies of fascism, many smaller, more overtly extremist groups in Britain, Europe and elsewhere have sought to reconnect their activism with memories of the fascist past. This talk will interrogate fascination with aspects of the fascist past and consider how they help such groups today develop a culture that appeals to younger men especially through themes of hypermasculinity and underpin ongoing support through a politics of emotions.

Professor Paul Jackson is a specialist in the contemporary history of British fascism. His books include Pride in Prejudice: Understanding Britain’s Extreme Right (MUP, 2022). He is also the academic curator of the Searchlight Archive at the University of Northampton, a major collection of material linked to the recent history of the extreme right.