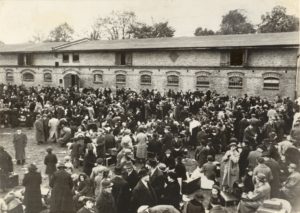 This year’s event will focus on the experiences of victims of Nazi genocide on the day that they were deported to ghettos and camps and will include readings from the Library’s collection of eyewitness accounts of the Holocaust on this theme. The event will also feature a talk by Dr Christoph Kreutzmüller exploring the significance of the contemporary photographs taken of deportations of Jews during the Holocaust.

With remarks by Dr Toby Simpson, Director of The Wiener Holocaust Library and readings by a Camden Youth MP.

We ask that audience members take a lateral flow test in the 24 hours before attending.

If you would like to join us virtually please register for a live stream ticket here.

Dr Christoph Kreuzmüller is a Berlin-based curator, educator and historian. In the new research project last seen, he is currently designing an educational tool for a close reading of deportation photos. His acclaimed study Final Sale in Berlin. The destruction of Jewish commercial activity 1930-1945 was published in 2015 by Berghahn Books and presented at The Wiener Library. His latest study Die fotografische Inszenierung des Verbrechens. Ein Album aus Auschwitz (together with Tal Bruttmann und Stefan Hördler) has been published by the Wissenschaftliche Buchgesellschaft in 2019.

Sabrina Francis is a Labour councillor for Bloomsbury, currently serving her second term. She has lived in Camden for her whole life and attended Brecknock Primary School and Camden School for Girls. First elected in 2014, Sabrina is Camden Labour’s first black woman councillor. In 2020 she launched and chaired a Youth Engagement Group, giving young people from Camden the opportunity to co-design policy that tackles racial inequality in the criminal justice and education systems. Alongside being a councillor, Mayor Francis currently works in digital engagement and has previously held digital roles at an agency and on a political campaign. In 2017 she was recognised on the New Year’s Honours List for services to the University of London.

We regret to inform visitors that our exterior lift is currently out of service. This is due to ongoing repair works and we apologise for the inconvenience. If you have any comments, questions, or concerns regarding accessibility at the Library, please email us at [email protected]enerholocaustlibrary.org or call us on +44 (0) 20 7636 7247.