Home Events Hybrid Event: The Future of Holocaust History: An Event for the IHR’s Centenary, In Partnership with Yale University Press

Hybrid Event: The Future of Holocaust History: An Event for the IHR’s Centenary, In Partnership with Yale University Press

This event, a collaboration between The Wiener Holocaust Library, Yale University Press and The Institute of Historical Research (IHR), is being held to mark the IHR’s centenary year. 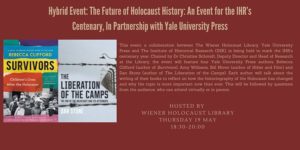 Chaired by Dr Christine Schmidt, Deputy Director and Head of Research at the Library, the event will feature four Yale University Press authors, Rebecca Clifford (author of Survivors), Amy Williams, Bill Niven (author of Hitler and Film) and Dan Stone (author of The Liberation of the Camps). Each author will talk about the writing of their books to reflect on how the historiography of the Holocaust has changed and why the topic is more important now than ever. This will be followed by questions from the audience, who can attend virtually or in person.

Dr Amy Williams is currently working with Mitteldeutscher Verlag, Yale University Press, and Camden House to produce new books on the history and memory of the Kindertransport. She is a part-time lecturer at Nottingham Trent University and recently appeared on the BBC series Great British Railway Journeys. She is currently working on a book, with Bill Niven, for Yale UP, Kindertransport, A Transnational Journey.

Professor Bill Niven is is Professor in Contemporary German History at Nottingham Trent University. He is the author of numerous books on memory of the Nazi period. His books include Facing the Nazi Past (2001), The Buchenwald Child (2007), and, with Yale UP, Hitler and Film: The Führer’s Hidden Passion (2018). He has just published a book in Germany with Mitteldeutscher Verlag on the postwar history of the Nazi film Jud Süß. He is currently working on a book, with Amy Williams, for Yale UP, Kindertransport, A Transnational Journey.

Dan Stone is Professor of Modern History and Director of the Holocaust Research Institute at Royal Holloway, University of London. He is a historian of ideas who works primarily on twentieth-century European history. His forthcoming books include Fate Unknown: Tracing the Missing after the Holocaust (Oxford University Press, 2022) and The Holocaust: An Unfinished History (Penguin/Pelican, 2023).

Christine Schmidt is Deputy Director and Head of Research at The Wiener Holocaust Library. Her research is focused on postwar search and collecting initiatives, the Nazi concentration camp system and comparative studies of collaboration and resistance in France and Hungary. She is currently writing a social history and archival biography of a collection of survivor accounts recorded by the Library and led by Eva Reichmann in the 1950s.

If you are joining online: