The Wiener Holocaust Library is delighted to host an evening lecture by the winner of our 2021 Ernst Fraenkel Prize. The jury has awarded Franziska Exeler’s book, Ghosts of War: Nazi Occupation and its Aftermath in Soviet Belarus the prize. 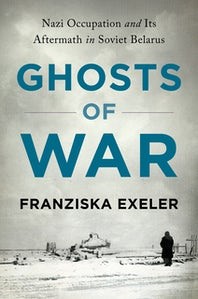 The judges noted that they “found it to be an ambitious – and successful – deep dive, exploring questions of wartime compliance, complicity, and collaboration and the post-war toll that these exacted. It is strikingly original in exploring issues that many have acknowledged but few have investigated and is a very worthy winner of this prestigious prize.”

How do states and societies confront the legacies of war and occupation, and what do truth, guilt, and justice mean in that process? In Ghosts of War, Franziska Exeler examines people’s wartime choices and their aftermath in Belarus, a war-ravaged Soviet republic that was under Nazi occupation during the Second World War. After the Red Army reestablished control over Belarus, one question shaped encounters between the returning Soviet authorities and those who had lived under Nazi rule, between soldiers and family members, reevacuees and colleagues, Holocaust survivors and their neighbors: What did you do during the war?

Ghosts of War analyses the prosecution and punishment of Soviet citizens accused of wartime collaboration with the Nazis and shows how individuals sought justice, revenge, or assistance from neighbours and courts. The book uncovers the many absences, silences, and conflicts that were never resolved, as well as the truths that could only be spoken in private, yet it also investigates the extent to which individuals accommodated, contested, and reshaped official Soviet war memory. The result is a gripping examination of how efforts at coming to terms with the past played out within, and at times through, a dictatorship.

Franziska Exeler is Assistant Professor of History at Free University Berlin. She is also a Research Fellow at the Centre for History and Economics, Magdalene College, University of Cambridge.