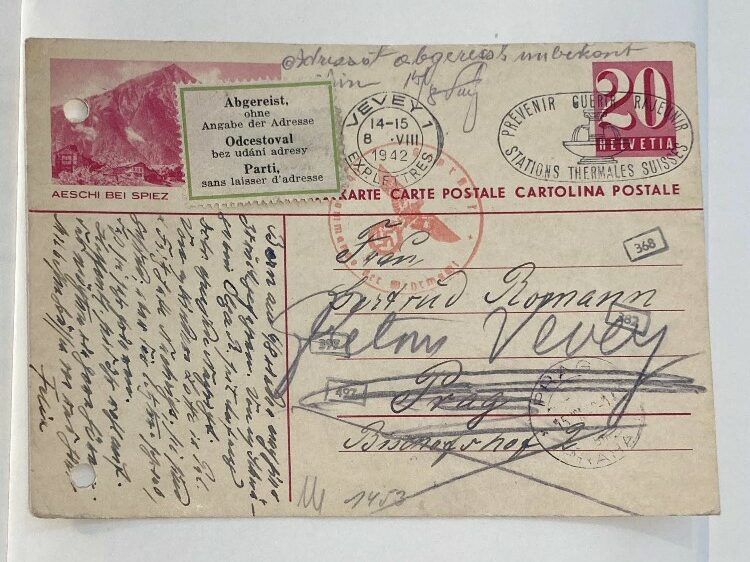 This event is organised as part of the Holocaust Letters exhibition events series and is the public evening event for the Letter Writing in Holocaust Studies workshop. Audiences can attend this event either in-person or online.

The Wiener Holocaust Library, in partnership with the Holocaust Research Institute at Royal Holloway, University of London, for the Holocaust and Genocide Research Partnership and Parkes Institute for the Study of Jewish/non-Jewish Relations (University of Southampton), are delighted to host this hybrid panel discussion with Prof Shirli Gilbert and Prof Joachim Schlör, led in conversation by Charlie Knight, on letters in Holocaust-related research. Both Gilbert and Schlör have conducted extensive research based on treasure troves of personal correspondence belonging to Jewish refugees. They will reflect on their significance for our understanding of everyday experiences of persecution and forced migration during the Holocaust.

Shirli Gilbert is Professor of Modern Jewish History at University College London, and a specialist in modern Jewish history, with particular interest in the Holocaust and its legacies, modern Jewish identity, and Jews in South Africa. She is the author of From Things Lost: Forgotten Letters and the Legacy of the Holocaust (2017) among numerous other books and essays. She holds a D. Phil in Modern History from the University of Oxford and was a Postdoctoral Fellow in the Society of Fellows at the University of Michigan. Before coming to UCL, she was Karten Professor of Modern History and Director of the Parkes Institute for Jewish/ non-Jewish Relations at the University of Southampton.

Joachim Schlör is Professor of Modern Jewish/non-Jewish Relations in History at the University of Southampton, UK. He is the author of Escaping Nazi Germany: One Woman’s Emigration from Heilbronn to England (2022), as well as Nights in the Big City: Paris, Berlin, London, 1840 – 1930 (2016). He is the editor of the journal Jewish Culture and History, and (with Johanna Rolshoven) co-editor of the online journal Mobile Culture Studies.

Charlie Knight is a Postgraduate Researcher at the Parkes Institute for the Study of Jewish/non-Jewish Relations at the University of Southampton. He is the recipient of the Wolfson Postgraduate Scholarship in the Humanities for his research on German-Jewish refugees in Britain during the 1930s and 1940s. His most recent article with Jewish Culture and History looks at narrative construction in the letter collection of Theodor Hirschberg. He is also co-organiser of the workshop: ‘Letter Writing in Holocaust Studies’.