Home Events The Forgotten Tribunal: the Lessons and Legacy of the International Criminal Tribunal for Rwanda

The Forgotten Tribunal: the Lessons and Legacy of the International Criminal Tribunal for Rwanda 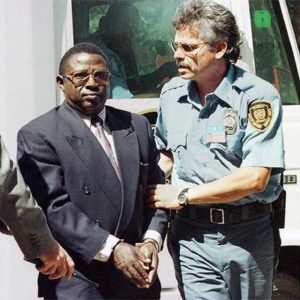 Theoneste Bagosora, convicted of genocide and crimes against humanity by the ICTR in relation to the 1994 genocide against the Tutsi.

The International Criminal Tribunal for Rwanda (ICTR) was established in Arusha, Tanzania, in November 1994. During the following twenty years, the court indicted ninety-three individuals accused of orchestrating the genocide against the Tutsi.  Sixty-one were later sentenced for their leading role in the tragedy. It produced important legal precedents – for example, being the first international court to enter a judgement of genocide and recognising rape as a means of perpetrating genocide. However, the tribunal suffered from a number of troubling and controversial aspects that led to accusations that the UN – and its version of justice – had again failed Rwanda and the wider international community.

Eight years on, the remaining work of the ICTR is left to the Residual Mechanism (MICT), including enacting the upcoming trial of the Félicien Kabuga, former head of Hutu Power hate radio RTLM. Yet the ICTR – and its important lessons and legacy – have to a large extent been overlooked with little contemporary media coverage or public acknowledgement during or after the ICTR closed its doors. Its huge and important archives remain little used or known about.

At a time when international justice is very much in the headlines, this symposium will assess the history and legacy of the ICTR from different perspectives, bringing together panellists who are experts in international criminal justice and those who have first-hand experience of the ICTR. The discussion will seek to cover the following themes: the history of the ICTR, its rationale, beginnings and years of operation; its significant achievements; the issues and challenges that the ICTR faced during its years of operation; and the ongoing legacy of the ICTR, including its impact from a Rwandan perspective and the implications for international justice more broadly going forward.

Robert Jackson, Chief of Counsel for the United States in prosecuting the principal Axis War Criminals noted in 1945 that the role of the Nuremberg trials was to ‘establish incredible events by credible evidence’. Did the ICTR and now the Mechanism achieve this and bring justice to the people of Rwanda, as well as legal clarity and precedents to assist in future international trials? And finally, going forward, how can the ‘credible evidence’ it uncovered during two decades of work help the continuing fight against genocide denial?

Dr Andrew Wallis, author and researcher into the 1994 genocide against the Tutsi and a trustee of the Ishami Foundation

Charles Petrie, diplomat and author, served as UN Deputy Humanitarian Coordinator for Rwanda in 1994 and in UN missions including Sudan, Somalia, DRC, Myanmar and Afghanistan. Author of The Triumph of Evil: Genocide in Rwanda and the Fight for Justice (2021)

Ernest Sagaga, Head of Human Rights and Safety Department at the International Federation of Journalists and President of Ibuka Belgium. He served as the first official spokesperson of the International Criminal Court in the Hague and is a former journalist with the BBC World Service

Stephen J. Rapp, US Ambassador-at-Large for War Crimes in Office of Global Criminal Justice (2009-15), former senior trial attorney in the ICTR ‘Media’ Trial and led prosecution of Charles Taylor at the Special Court for Sierra Leone. Current chair of Commission for International Justice and Accountability investigating crimes in Syria and Iraq