Home Events Exhibition Launch: “We are not alone”: Legacies of Eugenics

Exhibition Launch: “We are not alone”: Legacies of Eugenics 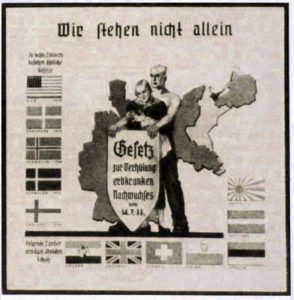 Join The Wiener Holocaust Library to mark the launch of a new travelling exhibition, curated by Professor Marius Turda (Oxford Brookes University), which explores the history and legacies of eugenics, a hundred years on from the influential Second International Eugenics Congress.

“We are not alone”: Legacies of Eugenics is part of a global anti-eugenic movement initiated by ‘From Small Beginnings‘.

The evening will feature contributions by Dr Lisa Pine and Professor Joe Cain.

Marius Turda is Professor of 20th Century Central and Eastern European Biomedicine and Director of the Centre for Medical Humanities, Oxford Brookes University.

Lisa Pine is a Fellow of the Royal Historical Society.

Joe Cain is Professor of History and Philosophy of Biology at the University College London.