Home Events Recovery & Repair: Fate Unknown: The Search for the Missing after the Holocaust

Recovery & Repair: Fate Unknown: The Search for the Missing after the Holocaust

This is an in-person event taking place at the Manchester Jewish Museum.

Part of the Library’s Recovery & Repair: Supporting Jewish Family Histories of the Holocaust in Britain ITS event series.

The Wiener Holocaust Library is home to the UK’s International Tracing Service digital archive, which holds millions of documents related to the Holocaust and Nazi era. The archive preserves the shared past of victims and survivors of the Holocaust and helps support family research of Nazi persecution. 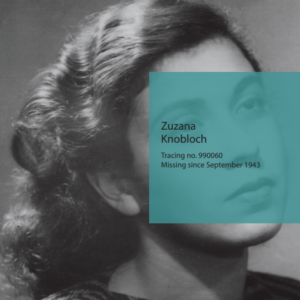 We welcome historians, archivists, family historians, heritage practitioners, and anyone interested in Jewish and Holocaust history and its aftermath.

Join the co-curators of the Fate Unknown exhibition, Professor Dan Stone and Dr Christine Schmidt, who will explore the remarkable, little-known story of the search for the missing after the Holocaust. Fate Unknown draws upon The Wiener Holocaust Library’s family document collections and the International Tracing Service archive to illustrate the legacy of the ongoing search for missing victims.

Following their talk, a panel of distinguished speakers will discuss patterns of persecution and survival found in Jewish and other archives: Elise Bath (Wiener Holocaust Library), on Roma and Sinti victims in the ITS archive; Niamh Hanrahan (University of Manchester), on humanitarian relief in Asia, and Professor Cathy Gelbin (University of Manchester), on the creation of the Archive of Memory, among other speakers.