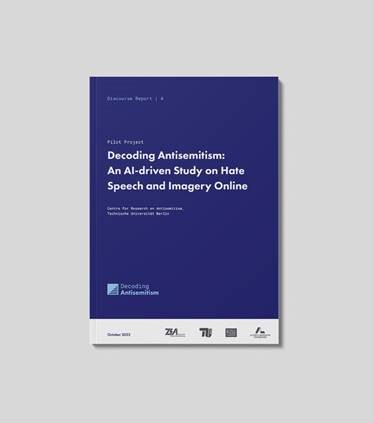 In partnership with the Decoding Antisemitism: An AI-driven Study on Hate Speech and Imagery Online project

What antisemitic reactions have been triggered online by recent news stories, such as the Russian invasion of Ukraine, terrorist attacks in Israel, or novelist Sally Rooney’s boycott of Israeli publishers? Which stereotypes and conspiracy theories are they fuelling?

Antisemitic discourse on the internet provides insights into the present and future of an ideology of hate which, due to its adaptability, permeates all social milieus and is currently experiencing a new high – not least due to the specific character of online communication. Decoding Antisemitism: An AI-driven Study on Hate Speech and Imagery Online is a transnational and interdisciplinary research project analysing the content, structure and frequency of antisemitism in online comments sections, focusing on the mainstream media of selected European societies – the UK, France and Germany. It is carried out by a research team at the Centre for Research on Antisemitism (ZfA, TU Berlin) in collaboration with King’s College London.

In this talk, the team present findings from their most recent Discourse Report, which focuses on online antisemitic discourses triggered by two recent major international events: the Russian invasion of Ukraine and a series of terrorist attacks in Israel, analysing the differences and similarities in the way web users reacted to these discourse triggers in the UK, France and Germany. In addition, we discuss four national case studies which drew our attention due to the number of antisemitic reactions they elicited: novelist Sally Rooney’s boycott of Israeli publishers in the UK, the Pegasus spyware case in France, and the controversies around singer Gil Ofarim and the documenta 15 art exhibition in Germany.

Dr Matthew Bolton is a researcher, lecturer and writer focusing on conceptual history, critical theory, antisemitism and genocide studies. He received his PhD in Philosophy from the University of Roehampton, London in 2020, with his thesis exploring the relationship between the development of the concept of justice and the capitalist state form. In 2018 his co-authored monograph on the ideological underpinnings of the Corbyn movement, Corbynism: A Critical Approach, was published by Emerald Books. His articles have been published in British Politics, Political Quarterly, the Journal of Contemporary Antisemitism, and Fathom, and his work has received widespread media coverage in the UK.

Karolina Placzynta is a linguist and political scientist with a background in pragmatics, sociolinguistics and critical discourse analysis, having completed postgraduate degrees in Applied Linguistics and in Politics and International Studies. Her research centres on the mainstreaming and marginalisation of discourses in the media, normalisation of bias, and intersections of discriminatory discourses. She has previously examined the patterns of discursive representations of immigration in the British press, and is a member of the DiscourseNet association.