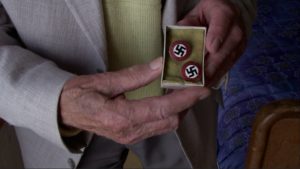 Please join us on Monday 25 October, 6-7.30pm, for the launch of a major new collection of nearly 300 filmed interviews with ‘Third Reich’ contemporaries.

This important resource enhances our understanding of everyday life in Nazi Germany and Nazi-occupied Europe, and of post-war reflections on responsibility, complicity, and justice, of ‘ordinary’ people who were implicated in, witnesses to, or on the periphery of war and genocide. The collection includes accounts by former members of the Waffen-SS, SS, and Wehrmacht, secretaries in National Socialist and military organisations, alongside farm workers and homemakers.

British documentary filmmaker Luke Holland, who passed away on 10 June 2020, spent nearly a decade between 2008 and 2017 to conduct some 500 hours of interviews in multiple locations with more than 250 elderly people, including men and women from Germany, Austria, France, the Netherlands, and Belgium. His feature-length documentary film ‘Final Account’ premiered in 2020.

The archival project was initiated and directed by Luke Holland (ZEF Productions), in association with the Institut National de l’Audiovisuel (INA) in France, UCL, and The Wiener Holocaust Library, and Founding Partners, Pears Foundation.

Researchers will be able to access the collection at the Institut National de l’Audiovisuel, the Library, and UCL from autumn 2021.