We are delighted to announce the publication of the proceedings of Beyond Camps and Forced Labour: Sixth International Conference, co-edited by Suzanne Bardgett, Christine Schmidt and Dan Stone. 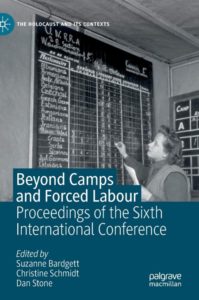 This book presents a selection of the newest research on themes amplified by the sixth annual Beyond Camps and Forced Labour conference held in 2018 on the post-Holocaust period, including ‘displaced persons’, reception and resettlement, exiles and refugees, trials and justice, reparation and restitution, and memory and testimony. The chapters highlight new, transnational approaches and findings based on underused and newly opened archives, including compensation files of the British government; on historical actors often on the periphery within English-language historiography, including Romanian and Hungarian survivors; and new approaches such as the spatial history of Drancy, as well as geographies that have undergone less scrutiny, for example, Tehran, Chile, Mexico and Cyprus. This volume represents the vibrant and varied state of research on the aftermath of the Holocaust.

Like the conference in 2018, it is dedicated to the memory of Professor David Cesarani OBE.

A Spatial History of Drancy: Architecture, Appropriation and Memory

Christine Schmidt is Deputy Director and Head of Research at The Wiener Holocaust Library in London, UK. She has published essays in Agency and the Holocaust: Essays in Honor of Debórah Dwork (Palgrave, 2020) and Tracing and Documenting Nazi Victims Past and Present (2020).

Suzanne Bardgett is Head of Research and Academic Partnerships at Imperial War Museums, UK, and has been a member of the organizing committee for the Beyond Camps and Forced Labour conference since its inception in 2003. She is the author of Wartime London in Paintings (2020).

Dan Stone is Professor of Modern History and Director of the Holocaust Research Institute at Royal Holloway, University of London, UK. He has published sixteen books including Histories of the Holocaust (2010), The Liberation of the Camps: The End of the Holocaust and its Aftermath (2015) and Concentration Camps: A Very Short Introduction (2019).