Home Events Virtual Book Launch: In the Shadow of the Holocaust: Poland, the United Nations War Crimes Commission and the Search for Justice

Virtual Book Launch: In the Shadow of the Holocaust: Poland, the United Nations War Crimes Commission and the Search for Justice

The Wiener Holocaust Library is delighted to partner with UCL’s Institute of Jewish Studies and the Institute for Polish Jewish Studies to launch Michael Fleming’s new book, In the Shadow of the Holocaust. This event will take place online, but it is possible that limited in-person places will be available closer to the event. 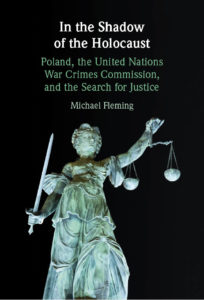 In the midst of the Second World War, the Allies acknowledged Germany’s ongoing programme of extermination. In the Shadow of the Holocaust examines the struggle to attain post-war justice and prosecution. Focusing on Poland’s engagement with the United Nations War Crimes Commission, it analyses the different ways that the Polish Government in Exile (based in London from 1940) agitated for an Allied response to German atrocities. The book shows that jurists associated with the Government in Exile made significant contributions to legal debates on war crimes and, along with others, paid attention to German crimes against Jews. By exploring the relationship between the UNWCC and the Polish War Crimes Office under the authority of the Polish Government in Exile and later, from the summer of 1945, the Polish Government in Warsaw, the book provides a new lens through which to examine the early stages of the Cold War.

Michael Fleming is a historian at The Polish University Abroad, London and conference secretary to the Institute for Polish-Jewish Studies. His publications include Communism, Nationalism and Ethnicity in Poland, 1944-1950 (2010), Auschwitz, the Allies and Censorship of the Holocaust (2014) and (as editor) Essays Commemorating Szmul Zygielbojm (2018). He is a recipient of the Kulczycki Book Prize for Polish Studies and the Aquila Polonica Prize.

Dan Plesch is Director of the Centre for International Studies and Diplomacy in the Politics Department of SOAS University of London and is a ‘door tenant’ at the legal chambers of 9 Bedford Row, in London. He is the author of Human Rights After Hitler. His previous books include America Hitler and the UN, Wartime Origins and the Future UN (with Professor Weiss) and The Beauty Queen’s Guide to World Peace. He leads research on the UN, War Crimes and on Disarmament.

Julia Eichenberg is a senior lecturer at the University of Bayreuth, and a Freigeist Fellow and principal investigator of the research project “The London Moment” funded by the Volkswagen Foundation (2014-2023). In 2008, she was awarded a PhD in Modern History by the University of Tübingen for her research on Polish First World War veterans. Since then, she has held fellowships and lectured in Modern European History at Trinity College Dublin, University College Dublin and Humboldt University Berlin. She has published on aspects of war, welfare, violence, peace, and international collaboration. Her next book engages with the collaboration of European governments-in-exile in London during the Second World War.

Antony Polonsky is Chief Historian of the POLIN Museum of the History of Polish Jews, Warsaw and Emeritus Professor of Holocaust Studies at Brandeis University. Until 1991 he was Professor of International History at the London School of Economics and Political Science. He is co-chair of the editorial board of Polin: Studies in Polish Jewry, author of Politics in Independent Poland (1972), The Little Dictators (1975), The Great Powers and the Polish Question (1976); co-author of A History of Modern Poland (1980) and The Beginnings of Communist Rule in Poland (1981) and co-editor of Contemporary Jewish writing in Poland: an anthology (2001) and The neighbors respond: the controversy over the Jedwabne Massacre in Poland (2004). His most recent work is The Jews in Poland and Russia, volume 1, 1350 to 1881; volume 2 1881 to 1914; volume 3 1914 to 2008 (2010, 2012), published in 2013 in an abridged version The Jews in Poland and Russia. A Short History.