Home Events Virtual Book Launch: The Fatherland and the Jews

Virtual Book Launch: The Fatherland and the Jews 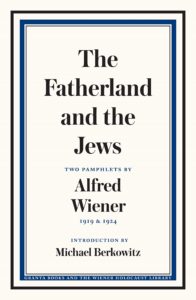 We are delighted to announce the publication of the inaugural title in a collaboration between the Library and Granta Books. These two pamphlets, Prelude to Pogroms? Facts for the Thoughtful and German Judaism in Political, Economic and Cultural Terms mark the first time that Dr Alfred Wiener, the founder of the Library, has been published in English.

A sharp and insightful thinker, Wiener’s writing reveals the critical role played by information and disinformation during the Antisemitic onslaught that followed Germany’s defeat in the First World War. Through tackling issues such as the planned rise of Antisemitism, the scapegoating of minorities, and the widespread use of propaganda, these pamphlets speak as urgently to the contemporary moment as well as providing a window on to the past.