We were delighted to launch Dr Anna Hájková’s book The Last Ghetto as part of the new Holocaust and Genocide Research Partnership. 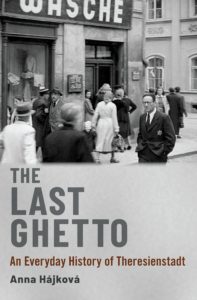 Terezín, as it was known in Czech, or Theresienstadt as it was known in German, was operated by the Nazis between November 1941 and May 1945 as a transit ghetto for Central and Western European Jews before their deportation for murder in the East. Terezín was the last ghetto to be liberated, one day after the end of the Second World War.

The Last Ghetto is the first in-depth analytical history of a prison society during the Holocaust. Rather than depict the prison society which existed within the ghetto as an exceptional one, unique in kind and not understandable by normal analytical methods,

Anna Hájková argues that such prison societies that developed during the Holocaust are best understood as simply other instances of the societies human beings create under normal circumstances. Challenging conventional claims of Holocaust exceptionalism, Hájková insists instead that we ought to view the Holocaust with the same analytical tools as other historical events.

The prison society of Terezín produced its own social hierarchies under which seemingly small differences among prisoners (of age, ethnicity, or previous occupation) could determine whether one ultimately lived or died. During the three and a half years of the camp’s existence, prisoners created their own culture and habits, bonded, fell in love, and forged new families. Based on extensive archival research in nine languages and empathetic reading of victim testimonies, The Last Ghetto is a transnational, cultural, social, gender, and organizational history of Terezín, revealing how human society works in extremis and highlighting the key issues of responsibility, agency and its boundaries, and belonging.

Dr Hájková is Associate Professor of Modern European Continental History at the University of Warwick. She regularly contributes to mass media in English, German, and Czech in the publications Haaretz, Süddeutsche Zeitung, Tablet, and Tagesspiegel. She holds a PhD from the University of Toronto.

Professor Stone is Professor of Modern History and Director of the Holocaust Research Institute at the Royal Holloway University of London. He is a historian of ideas who works primarily on twentieth-century European history. His research interests include the history and interpretation of the Holocaust, comparative genocide, history of anthropology, history of fascism, the cultural history of the British Right and theory of history.