Home Events Virtual Book Launch: The Palgrave Handbook of Britain and the Holocaust

Virtual Book Launch: The Palgrave Handbook of Britain and the Holocaust 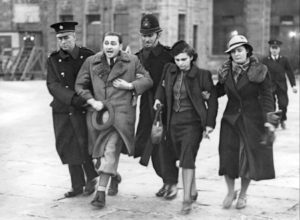 Members of a group of refugees from German-occupied Czechoslovakia being marched away by police at Croydon airport on 31 March 1939. Wiener Holocaust Library Collections.

In January 2021, a week before Britain’s twentieth Holocaust Memorial Day, the most comprehensive and up-to-date single volume on the history and memory of the Holocaust in Britain was published. To mark the publication of The Palgrave Handbook of Britain and the Holocaust, The Wiener Holocaust Library hosted an online panel discussion exploring how Britain has engaged and disengaged with the Holocaust in the past, how it continues to in the present, and reflected on how it may do so in the future.

Both The Palgrave Handbook on Britain and the Holocaust and this panel discussion take place at a time when the Holocaust has, arguably, a greater and more multifarious presence in Britain than has ever been the case. It is a state of affairs that raises significant and challenging questions about history and memory, how the two are entwined and interact, and how they are understood and valued in the present. Panellists were invited to reflect on these and other issues, as they consider Britain’s engagements and disengagements with the Holocaust.

Donald Bloxham is Richard Pares Professor of History at the University of Edinburgh. He has taught at Edinburgh since 2001, has written on history and philosophy of the discipline of history, and is a specialist in the study of genocide and the punishment of perpetrators of genocide.

Kara Critchell is Lecturer in History at the University of Chester. She has research expertise in British cultural engagement with genocide, perpetrators of mass violence, and political violence in contemporary society.

Hannah K. Holtschneider is Senior Lecturer in Jewish Studies at the University of Edinburgh. She is a cultural historian of twentieth-century history with a particular focus on the Holocaust, Jewish identities, and non-Jewish/Jewish relations.

Michael Rosen is Professor of Children’s Literature at Goldsmith’s University, an award-winning children’s author, and a former Children’s Laureate. Among his most recent works is The Missing: The True Story of My Family in World War II.

Tom Lawson is Professor of History at Northumbria University. He is the author and editor of several books, co-editor of Holocaust Studies: A Journal of Culture and History, and co-editor of The Palgrave Handbook of Britain and the Holocaust.

Andy Pearce is Associate Professor of Holocaust and History education at University College London. He has written and edited books on Holocaust history and memory in Britain and Holocaust education. He is co-editor of The Palgrave Handbook of Britain and the Holocaust.