Part of the Library’s Excavation-Confrontation-Repair? Family Histories of the Holocaust events series. 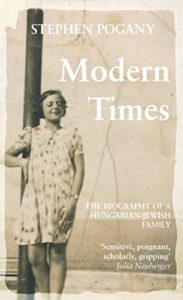 Beginning with the final decades of the doomed Austro-Hungarian Empire, Prof Stephen Pogany explores the lives of his mother’s family in Budapest and in the spa town of Balatonfüred. Drawing on a wide range of historical and literary sources, as well as extended interviews with family members and Holocaust survivors, Modern Times examines the reality of Hungarian-Jewish life in the first half of the twentieth century. In contrast to the familiar tropes that portray Jews as wealthy and privileged, many of Hungary’s Jews, like most of the ones we encounter in this memoir, toiled at menial jobs for low pay while facing growing prejudice and discrimination in the years leading up to the Holocaust.

Prof Stephen Pogany is an Emeritus Professor at the University of Warwick, where he specialised in international and comparative human rights law. He has written extensively on antisemitism and anti-Gypsyism in East Central Europe, particularly in Hungary. In October 2021, his family memoir, Modern Times: The Biography of a Hungarian-Jewish Family was published in the UK.

Dr Gábor Kádár is a recurrent visiting professor of the Jewish Studies Program at Central European University. He is former Senior Historian of the Hungarian Jewish Archives, Budapest. He is the author and co-author of six monographs and numerous studies, articles and encyclopedia entries regarding various aspects of the Holocaust, the history of Jews in Hungary as well as the history of genocide and ethnic violence in Central Europe. He is the Director of the Yerusha Project, a digital humanities initiative by the Rothschild Foundation Hanadiv Europe as well as a member of the Digital Forum Advisory Board of the European Association of Jewish Studies.