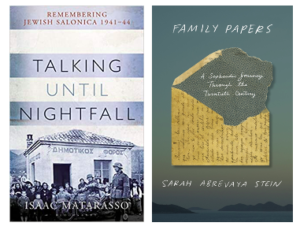 As part of its Excavation-Confrontation-Repair? Family Histories of the Holocaust events series, The Wiener Holocaust Library was delighted to host a panel discussion of new works that explore Sephardi family microhistories of the Holocaust, led by Dr Paris Chronakis. An expert on the history and memory of Greek Jewry, Chronakis lead Professor Sarah Abrevaya Stein and François Matarasso in conversation. Stein spoke about her book based on the copious Levy family papers, which helped chronicle Sephardi Jewish life across and beyond the Ottoman Empire, Family Papers: A Sephardic Journey through the Twentieth Century (2020), and Matarasso, discussed his father’s and grandfather’s memoirs, published in Talking Until Nightfall: Remembering Jewish Salonica, 1941-44 (2020).

Paris Chronakis is Lecturer in Modern Greek History at Royal Holloway, University of London having previously taught at Brown University and the University of Illinois at Chicago. He teaches and researches on the history and memory of the Modern Mediterranean and his work explores questions of transition from empire to nation-state by bringing together the entangled histories of Jews, Christians and Muslims from the late Ottoman Empire to the Holocaust. In recent years, his research and publications have expanded to post-imperial urban identities, Balkan War refugees, Zionism and anti-Zionism in interwar Europe, the Holocaust of Sephardi Jewry, and digital Holocaust Studies. Paris was a member of the scientific committee developing the ‘Database of Greek Jewish Holocaust Survivors’ Testimonies’ and is on the editorial board of the Bulletin de Correspondance Hellénique Moderne et Contemporain.

Sarah Abrevaya Stein is a historian, writer and educator whose work has reshaped our understanding of Jewish history. Her commitment to research is matched by her love of teaching. At UCLA, she is Professor of History, the Director of the Alan D. Leve Center for Jewish Studies, as well as the Viterbi Family Chair in Mediterranean Jewish Studies. She is the author or editor of nine books, including Family Papers: a Sephardic Journey Through the Twentieth Century and Plumes: Ostrich Feathers, Jews, and a Lost World of Global Commerce. Sarah has received many awards including the Sami Rohr Prize for Jewish Literature, two National Endowment for the Humanities Fellowships, a Guggenheim Fellowship, two National Jewish Book Awards and the UCLA Distinguished Teaching Award.

François Matarasso is a writer, researcher and consultant with 40 years’ experience in community-based arts development. He specialises in practice-led research, especially on the impact of culture, and in organisational support across the cultural sector. He has worked for international agencies, national and local governments, foundations and cultural organisations in some 30 countries. His work has been widely published and translated. His father and grandfather’s accounts have been published in Talking Until Nightfall: Remembering Jewish Salonica, 1941-44.

Hosted by The Wiener Holocaust Library in partnership with the Hellenic Institute, Centre for Greek Diaspora Studies and Holocaust Research Institute, Royal Holloway, University of London. 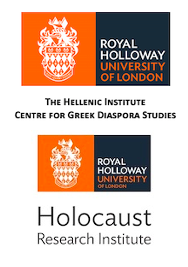