A Holocaust and Genocide Research Partnership event, part of The Wiener Holocaust Library’s Excavation-Confrontation-Repair? Family Histories of the Holocaust series. 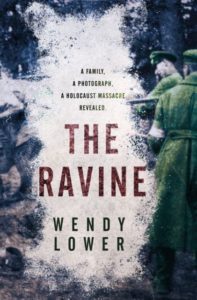 The terrible mass shootings in Poland and the Ukraine are often neglected in studies of the Holocaust because the perpetrators were meticulously careful to avoid leaving any evidence of their actions. Wendy Lower stumbled across one such piece of evidence – a photograph documenting the shooting of a mother and her children and the men who killed them – and from it has crafted The Ravine: A Family, A Photograph, A Holocaust Massacre Revealed, a forensically brilliant and moving study that brings the larger horror of the genocide into focus.

One of the most compelling themes to emerge from her investigations in Ukraine, Slovakia, Germany and the USA is the identity and the surprising role of the photographer who recorded the killings. He must, Lower assumed, have been part of the Nazi organization of genocide. The truth was different…

Professor Wendy Lower is the John K. Roth Professor of History and Director of the Mgrublian Center for Human Rights at Claremont McKenna College. She chairs the Academic Committee of the U.S. Holocaust Memorial Museum. Her research and teaching focus on the history of genocide, the Holocaust and human rights. Lower is the author of Hitler’s Furies: German Women in the Nazi Killing Fields (Houghton, 2013) which was a finalist for the National Book Award, and has been translated into 23 languages.

Dr Christine Schmidt is Deputy Director and Head of Research at The Wiener Holocaust Library, London, where she oversees academic outreach and programming. She earned her doctorate in history from Clark University in 2003. Her research has focused on the history of the International Tracing Service and early tracing efforts in Britain, postwar research and collection initiatives, the concentration camp system in Nazi Germany and comparative studies of collaboration and resistance in France and Hungary.

Please note: This event will take place on Zoom and the relevant details will be sent via email on the morning of the event.