A joint event with the Armenian Institute and The Wiener Holocaust Library.

Khatchig Mouradian’s newly published book, The Resistance Network, is the history of an underground network of humanitarians, missionaries, and diplomats in Ottoman Syria who helped save the lives of thousands during the Armenian Genocide. 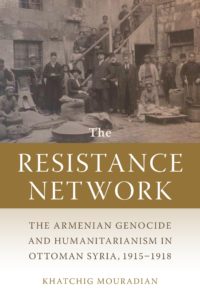 Mouradian challenges depictions of Armenians as passive victims of violence and subjects of humanitarianism, demonstrating the key role they played in organizing a humanitarian resistance against the destruction of their people. Piecing together hundreds of accounts, official documents, and missionary records, Mouradian presents a social history of genocide and resistance in wartime Aleppo and a network of transit and concentration camps stretching from Bab to Ras ul-Ain and Der Zor.

He ultimately argues that, despite the violent and systematic mechanisms of control and destruction in the cities, concentration camps, and massacre sites in this region, the genocide of the Armenians did not progress unhindered—unarmed resistance proved an important factor in saving countless lives.

Dr Khatchig Mouradian is a lecturer in Middle Eastern, South Asian, and African Studies (MESAAS) at Columbia University in the City of New York. He is the author of articles on genocide, mass violence, and unarmed resistance, the co-editor of a forthcoming book in late Ottoman history, and the editor of the peer-reviewed journal The Armenian Review. Mouradian holds a PhD in History from the Strassler Center for Holocaust and Genocide Studies at Clark University and a graduate certificate in Conflict Resolution from UMass Boston. He is the recipient of a Calouste Gilbenkian Research Fellowship to write the history of the Armenian community in China in the 19th and 20th centuries (2014). He is also the recipient of the first Hrant Dink Justice and Freedom Award of the Organization of Istanbul Armenians (2014). He serves on the Executive Committee of the Society of Armenian Studies (SAS) since 2015.