As part of our new academic book series, the Library is delighted to host a talk with Dr Bastiaan Willems on his book, Violence in Defeat: The Wehrmacht on German Soil, 1944-45. 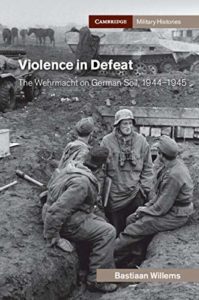 In the final year of the Second World War, as bitter defensive fighting moved to German soil, a wave of intra-ethnic violence engulfed the country. Willems offers the first study into the impact and behaviour of the Wehrmacht on its own territory, focusing on the German units fighting in East Prussia and its capital Königsberg. He shows that the Wehrmacht’s retreat into Germany, after three years of brutal fighting on the Eastern Front, contributed significantly to the spike of violence which occurred throughout the country immediately prior to defeat. Soldiers arriving with an ingrained barbarised mindset, developed on the Eastern Front, shaped the immediate environment of the area of operations, and of Nazi Germany as a whole. Willems establishes how the norms of the Wehrmacht as a retreating army impacted behavioural patterns on the home front, arguing that its presence increased the propensity to carry out violence in Germany.

Dr Bastiaan Willems is a Leverhulme Abroad Fellow at the Ludwig-Maximilians-Universität in Munich. Formerly, he was a Postdoctoral Research Fellow of Modern European History at University College London.