Virtual Conference: Echoes of Fascism: The Radical Right in the Twenty-First Century 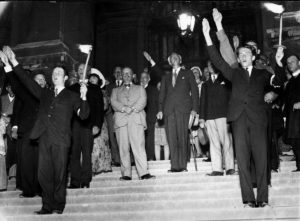 Students at the University of Vienna saluting in a torchlight parade together with the Rector, Hans Übersberger, in 1931. ÖNB Bildarchiv. H 780 B

A one-day conference organised by The Wiener Holocaust Library, The European Fascist Movements 1918-1941 project, the Centre for the Analysis of the Radical Right and HOPE not hate.

This academic conference is part of the Library’s This Fascist Life: Radical Movements in Interwar Europe exhibition and will explore the Radical Right in the twenty-first century. View the full conference schedule here.

Although fascism was defeated militarily at the end of the Second World War, neo-fascist and radical right movements have continued to spread racial hatred and to challenge liberal democracies ever since. The twentieth and twenty-first centuries have seen right-wing political parties, white supremacist scenes, extremist organisations, and governments promoting ultranationalist chauvinism in various forms. By interrogating the frames, repertoires, mobilisation strategies, and activities of the radical right, this conference seeks to understand how the radical right functions in today’s world so that we might be better equipped to combat it in the future.

Please note that this programme does not include all aspects of the conference. Some elements involve conference participants only and will not be live-streamed.

You will receive individual zoom links to join the conference on Tuesday 18 November via email, please check junk folders.

Chair: Matthew Feldman (Centre for Analysis of the Radical Right)