The Wiener Holocaust Library is delighted to host Dr Joanna Sliwa in conversation with Professor Natalia Aleksiun in honour of Dr Sliwa’s joint award of the 2020 Ernst Fraenkel Prize. Dr Sliwa’s award-winning manuscript, Jewish Childhood in Kraków, published in 2021 by Rutgers University Press, is the first book to tell the history of Kraków in the Second World War through the lens of Jewish children’s experiences. Here, children assume center stage as historical actors whose recollections and experiences deserve to be told, analyzed, and treated seriously. 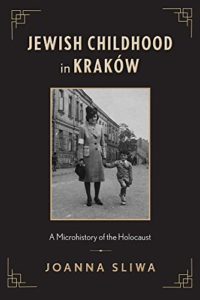 Sliwa scours archives to tell their story, gleaning evidence from the records of the German authorities, Polish neighbors, Jewish community and family, and the children themselves to explore the Holocaust in German-occupied Poland and in Kraków in particular. A microhistory of a place, a people, and daily life, this book plumbs the decisions and behaviors of ordinary people in extraordinary times.

Offering a window onto human relations and ethnic tensions in times of rampant violence, Jewish Childhood in Kraków is an effort both to understand the past and to reflect on the position of young people during humanitarian crises.

Dr Joanna Sliwa is a historian of the Holocaust and Polish Jewish history. She works as Historian at the Conference on Jewish Material Claims against Germany (Claims Conference), the only NGO that negotiates with the German government for compensation for Jewish Holocaust survivors. She has worked at the American Jewish Joint Distribution Committee, the Museum of Jewish Heritage in New York, and has taught at Kean University and at Rutgers University. She was jointly awarded the Ernst Fraenkel Prize in 2020 for her book manuscript, Jewish Childhood in Kraków, published by Rutgers University Press in 2021.

Dr Natalia Aleksiun is the Harry Rich Professor of Holocaust Studies at the University of Florida, Gainesville. She holds doctoral degrees from Warsaw University, Poland, and NYU, U.S. She specializes in the social, political, and cultural history of modern East European and Polish Jewry and the Holocaust. Aleksiun has written extensively on the history of Polish Jews, the Holocaust, Jewish intelligentsia in East-Central Europe, Polish-Jewish relations, and modern Jewish historiography. In addition to her 2021 book Conscious History: Polish Jewish Historians before the Holocaust (Littman Library of Jewish Civilization), she is the author of Dokad dalej? Ruch syjonistyczny w Polsce 1944–1950 (‘Where To? The Zionist Movement in Poland, 1944–1950’) (Warsaw, 2002) and co-editor of several volumes, including Polin: Studies in Polish Jewry, vol. 29: Writing Jewish History in Eastern Europe (2017) (with Brian Horowitz and Antony Polonsky) and European Holocaust Studies, vol. 3: Places, Spaces and Voids in the Holocaust (2021) (with Hana Kubátová). She also serves as co-editor of East European Jewish Affairs. Currently, she is a senior fellow at the Polish Institute of Advanced Studies in Warsaw. She is completing a new book about Jews in hiding in eastern Galicia during the Holocaust.