Virtual Event: The Holocaust in Public

In his final book, The Fate of the Jews, 1933–49, the British historian David Cesarani lamented the ‘yawning gulf’ between popular understanding of the Holocaust and academic scholarship. This public event provides an opportunity to evaluate the continued relevance of Cesarani’s critique, as new initiatives are launched (the Imperial War Museum’s new Holocaust Galleries opened to the public in October 2021) and others undergo continued refinement (development of UK secondary school teaching on the Holocaust by UCL’s Institute of Education; plans for a UK Holocaust Memorial alongside Parliament). 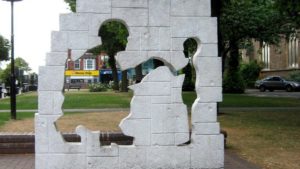 What is the value of academic involvement in processes of public education and commemoration? To what extent is such involvement a reality, particularly in the UK? What are the prospects for further growth in collaborative initiatives, and what are the obstacles? And how far does our expanded digital world impact this relationship?

The event will be moderated by Professor Shirli Gilbert (UCL, Academic Director of the Sir Martin Gilbert Learning Centre) and Dr Andy Pearce (Institute of Education, UCL). Offered in collaboration with the British Association for Holocaust Studies.

To find out more about this event and to register please click here.