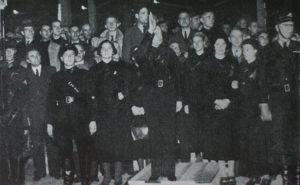 NSB leader Anton Mussert together with party members at an annual congress in The Hague, 1935. The image is out of copyright, originally produced by the NSB Photo Service, which was criminalised and dissolved in 1945.

The Netherlands and Sweden were better known in the interwar period for the stability of their democracies and their relative liberalism than fascism. Yet there too fascist parties emerged: tens of thousands of people joined the Dutch National Socialist Movement and the Swedish National Socialist Workers Party among many others and fought for a new fascist state. They did so fortunately without ultimate success – marginalised into oblivion, these groups can appear as only mediocre imitations of more successful models. This begs the question of why so many thousands of people not only joined, but persisted in a fanatical devotion to their cause, sometimes for decades far beyond any hope for victory. This lecture will explore the rise and decline of fascism in Sweden and the Netherlands, explain their appeal to ordinary fascists in spite of unfavourable conditions and the mediocrity of the objects of their devotion.

Dr Nathaniël Kunkeler is a historian of fascism and the far-right in interwar Europe, and a postdoctoral fellow at the Centre for Research on Right-Wing Extremism (C-REX) at the University of Oslo. They did their PhD at Cambridge University on the subject of Swedish and Dutch fascism, which has now been published as a monograph with Bloomsbury Academic: Making Fascism in Sweden and the Netherlands: Myth-Creation and Respectability, 1931-40. They are currently working on a research project about military volunteers and the transnational counter-revolutionary Right in north-western Europe 1917-40.