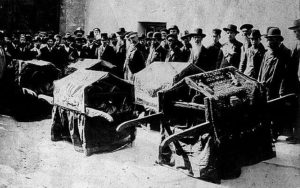 Funeral held for desecrated Torah scrolls following the Kishinev pogrom of 1903, in which 49 Jews were murdered and hundreds of women raped (public domain). Kishinev was then in the Russian Empire.

Discussions about the mass violence and racism perpetrated by European empires during the nineteenth and twentieth centuries do not always consider the situation in the Russian Empire, where genocide was committed against Muslim Circassians from the 1830s-1860s, and where the Jewish population suffered repeated waves of state-orchestrated discrimination, persecution and violence. This event will consider these events and the significance of racism and antisemitism in Imperial Russia. It will examine the legacies of these acts of ethnic mass violence during the Russian Civil War and in Nazi Germany.

Dr Polly Zavadivker is Assistant Professor of History and Jewish Studies and the Director of the Jewish Studies programme at the University of Delaware. She is the author of A Nation of Refugees: World War I and Russia’s Jews (Oxford University Press, forthcoming) and 1915 Diary of S. An-sky: A Russian Jewish Writer at the Eastern Front (2016).

Dr Brendan McGeever is a Senior Lecturer in Sociology at Birkbeck, University of London where he is also a Research Associate at the Birkbeck Institute for the Study of Antisemitism. He is the author of the prize-winning Antisemitism and the Russian Revolution (Cambridge University Press 2019).

Dr Andrew Sloin is Associate Professor of History and Co-Director of the Sandra K. Wasserman Jewish Studies Center at Baruch College, City University of New York. He has expertise in Russian, East European, Soviet, and Jewish history. He is the author of The Jewish Revolution in Belorussia: Economy, Race, and Bolshevik Power (2017).