Virtual Panel: Reckonings and Forced Confrontations after the Holocaust 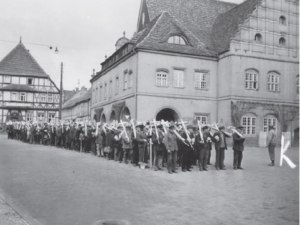 22 April 1945. Civilians from Gardelegen are assembled in the town square by US military authorities to march to the nearby cemetery for victims of the Gardelegen massacre and plant crosses at their graves. Stiftung Gedenkstätten Buchenwald und Mittelbau-Dora, National Archives and Records Administration.

As part of the Death Marches: Evidence and Memory exhibition events series, we are pleased to announce a virtual panel of speakers who will discuss aspects of reckonings with the Holocaust in the immediate post-war period. Panelists will explore the disintegration of the camps system; ‘forced confrontations’ between Allied militaries and the German civilian population; post-war trials of perpetrators involved in the death marches; and the lives of Holocaust survivors in the aftermath of liberation.

We welcome anyone interested in learning more about the latest scholarship in the field of Holocaust and genocide studies to attend.

Professor Margarete Myers Feinstein is clinical assistant professor in Jewish Studies at Loyola Marymount University. She received her Ph.D. in Modern European History from the University of California, Davis. Prof. Feinstein was also assistant professor of history at Indiana University South Bend and a research scholar at the UCLA Center for the Study of Women and the UCLA Center for Jewish Studies. Interested in the legacies of Nazism, she has published on postwar German national identity and on Jewish Holocaust survivors, including State Symbols, 1949–1959 (Brill, 2002), Holocaust Survivors in Postwar Germany, 1945–1957 (CUP, 2010), and numerous book chapters and articles. Most recently, she published “Reconsidering Jewish Rage after the Holocaust” in the Palgrave Handbook of Holocaust Literature and Culture, edited by Victoria Aarons and Phyllis Lassner (2020). Her current project on retribution after the Holocaust has received support from the Hadassah-Brandeis Institute and the National Endowment for the Humanities.

Dr Stefan Hördler is Lecturer at the Institute for Economic and Social History, University of Göttingen. He specializes in twentieth-century German and transnational history, Holocaust and genocide studies, social and economic history. Hördler is the author and co-editor of several books. His most recent publications are, among others, “Die fotografische Inszenierung des Verbrechens. Ein Album aus Auschwitz” (Darmstadt: WBG Academic, 2019) or “Ordnung und Inferno. Das KZ-System im letzten Kriegsjahr” (Göttingen: Wallstein, 20202). He is member of several academic advisory boards in Europe. For the past decade, Hördler served as expert consultant in a number of international investigations against former Nazi camp personnel such as in the Auschwitz trials in Lüneburg (2015) and Detmold (2016), and the Stutthof trials in Münster (2018) and Hamburg (2020).

Dr Alex J. Kay is Senior Lecturer in History at the University of Potsdam and lifetime Fellow of the Royal Historical Society. He specialises in the history of Germany from 1914 to 1945, National Socialist policies of extermination, and comparative research on genocide and mass violence. He has published five acclaimed books on Nazi Germany, including The Making of an SS Killer, which appeared in 2016 with Cambridge University Press, and Empire of Destruction: A History of Nazi Mass Killing, due out later this year with Yale University Press.

Professor Christopher Mauriello is Professor of History and Director of the Center for Holocaust and Genocide Studies at Salem State University in Salem, Massachusetts. He teaches and researches in the fields of modern European intellectual and cultural history, World War II, the Holocaust, and comparative genocide studies. He is author of Forced Confrontation: The Politics of Dead Bodies in Germany at the End of World War II (Lexington Books, 2017) and co-author of From Boston to Berlin: A Journey Through World War II in Images and Words (Purdue University Press, 2001). His current research focuses on the end of WWII and the complex political, social and cultural meanings imposed on dead bodies and human remains in the wake of war and mass violence.

Dr Martin Clemens Winter was born in 1981 in Nordhausen, Germany. He studied History, Sociology and Communications- and Media Science in Leipzig. His PhD thesis “Gewalt und Erinnerung im ländlichen Raum. Die deutsche Bevölkerung und die Todesmärsche” (“Violence and Remembrance in Rural Areas: The German Population and the Death Marches”) was awarded with the Stanislav Zámecník Research Award of the Comité International de Dachau in 2018. Winter has worked in memorial sites, in historical-political education and exhibition projects. From 2017 to 2020, he worked for the Lord Mayor of the City of Leipzig with a focus on memorial events and culture of remembrance. In 2020, Winter held a post-doctoral research grant of the Fritz Bauer Institute Frankfurt am Main. Since 2021, he is Alfred Landecker Lecturer at the Leipzig University with the project “Corporate Culture, Forced Labour and Mass Murder at the HASAG armaments company from Leipzig”, funded by the Alfred Landecker Foundation.