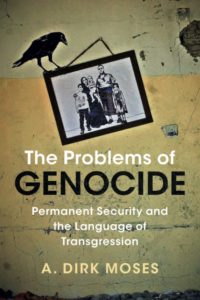 This event was originally scheduled for 25 October but has been rescheduled to 1 December due to illness.

Genocide is not only a problem of mass death but also of how, as a relatively new idea and law, it organizes and distorts thinking about civilian destruction. Taking the normative perspective of civilian immunity from military attack, A. Dirk Moses argues that the implicit hierarchy of international criminal law, atop which sits genocide as the ‘crime of crimes’, blinds us to other types of humanly caused civilian death, like bombing cities, and the ‘collateral damage’ of missile and drone strikes. Talk of genocide, then, can function ideologically to detract from systematic violence against civilians perpetrated by governments of all types. The Problems of Genocide contends that this violence is the consequence of ‘permanent security’ imperatives: the striving of states, and armed groups seeking to found states, to make themselves invulnerable to threats.

Dirk Moses is the Frank Porter Graham Distinguished Professor of Global Human Rights History at the University of North Carolina. He is a historian genocide, memory, and intellectual history. His first book, German Intellectuals and the Nazi Past (2007), investigated the West German debates about renewing democracy in the wake of the failure of the Weimar Republic and the Holocaust. He has edited many anthologies on genocide, including, most recently, Postcolonial Conflict and the Question of Genocide: The Nigeria-Biafra War, 1967–1970 (2018), The Holocaust in Greece (2018), and Decolonization, Self-Determination, and the Rise of Global Human Rights Politics  (2020). His investigation of the origins and function of the genocide concept appears in his second monograph, The Problems of Genocide (2021). Dirk is working on two book projects. One on what he calls the Diplomacy of Genocide and another called Genocide and the Terror of History. In his spare time, he edits the Journal of Genocide Research.

Christine Achinger is Associate Professor of German Studies at the University of Warwick. Her current research investigates the interrelation of constructions of Jewishness, race and gender as responses to the development of capitalist modernity during the long 19th century. Among her publications are Gespaltene Moderne. Gustav Freytags Soll und Haben – Nation, Geschlecht und Judenbild (2007) and Antisemitism, Racism and Islamophobia: Distorted Faces of Modernity (ed. w. Robert Fine, 2015).

Philippe Sands is Professor of public understanding of law at University College London, and Samuel and Judith Pisar Visiting Professor of Law at Harvard Law School. He is President of English PEN and on the board of the Hay Festival of Arts and Literature. Author of many books, including East West Street (2016) and The Ratline (2020), Philippe is an occasional contributor to many publications, including The Guardian, Financial Times and New York Times, and appears regularly on the BBC and CNN. His next book, The Last Colony, will be published in September 2022.