Home Events Virtual PhD and a Cup of Tea: In the archive with Lotte Eisner: how she solved the problem of ‘Maria’ (the robot)

Virtual PhD and a Cup of Tea: In the archive with Lotte Eisner: how she solved the problem of ‘Maria’ (the robot) 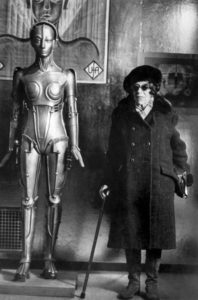 Lotte Eisner and a model of ‘Maria’ from Metropolis (Fritz Lang, 1927) in the museum of the Cinémathèque française. Courtesy of Mark Horowitz.

This talk is about visibility in the archive and its consequences. The focus is Lotte H Eisner, well known as a film historian and author of three major retrospective studies of Weimar cinema: The Haunted Screen (1952), FW Murnau (1964) and Fritz Lang (1974). From 1945 she was also Chief Curator at the Cinémathèque Française and during her 30-year career there as a collector and archivist, created and built a magnificent archive of material film culture including items such as scripts, sets, technical equipment, costumes, models, posters and books. However, this important work has tended to be overlooked by film historians and, in some cases, wrongly documented. Using examples of Eisner’s collecting and curation, this talk will reveal how a lack of classification in the archive can lead to historiographical confusion and eventually invisibility.

Julia Eisner is working on a PhD about her great-aunt the film historian, writer and curator, Lotte H Eisner, at King’s College, University of London. Prior to her PhD project, Julia was a BBC Radio 4 reporter and producer for 20 years making features and documentaries. She then changed career and took an LLB and an LLM at Birkbeck, the University of London where she taught in the Law faculty and worked as a research assistant on a European Law Project. In January 2016 Julia left Birkbeck to concentrate on researching and writing. In November 2016, her programme The Vigil was broadcast on BBC Radio 4.