Home Events Virtual PhD and a Cup of Tea: Ustaša Killing Specialists: the Personnel of the Jasenovac Concentration and Death Camp

Virtual PhD and a Cup of Tea: Ustaša Killing Specialists: the Personnel of the Jasenovac Concentration and Death Camp 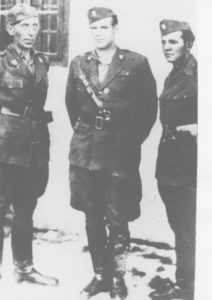 With an estimated 90,000 to 100,000 victims, the Jasenovac concentration and death camp complex (1941–1945) was a major killing site during the Second World War and the epicentre of state-organized destruction in the fascist Independent State of Croatia. Emil Kjerte’s doctoral research focuses on the Croatian men and women stationed at the camp complex. Drawing on records from post-war trials and survivor testimonies, he studies the guards’ backgrounds and motivations for volunteering for service, the social dynamics of the violence they perpetrated, their interactions with civilians and state actors outside the camp complex and their post-war trajectories.

Emil Kjerte is a doctoral candidate at the Strassler Center for Holocaust and Genocide Studies, Clark University in Massachusetts. He holds a BA in History from the University of Copenhagen and an MA in Holocaust and Genocide Studies from Uppsala University. Besides EHRI, his research has been supported by the Central European History Society, the Holocaust Educational Foundation of Northwestern University, the United States Holocaust Memorial Museum and the Fondation pour la Mémoire de la Shoah. He will be a Conny Kristel European Holocaust Research Infrastructure Fellow at the Library in September 2022.