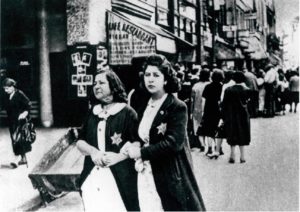 In the interwar period, Germany was politically unstable. The trauma caused by the First World War and the Great Depression left many Germans disheartened and susceptible to extremist ideas.

The Nazi Party seemingly offered hope and solutions. The Party condemned the unpopular Treaty of Versailles and offered an explanation for Germany’s problems – the Jews. Although this was not a new idea in Germany, where antisemitism had been growing since the start of the century, Nazi ideology placed antisemitism and racist ideas at its centre.

This revision session, aimed at GCSE and A-Level students, will utilise sources from the Library’s unique archive to examine the Nazi’s creation of a ‘Racial State’. It will explore the radicalisation of the state; Nazi racial ideology; increasing antisemitic policies and actions as well as the treatment of Jews in the early years of war by looking at the development of ghettos and deportations.