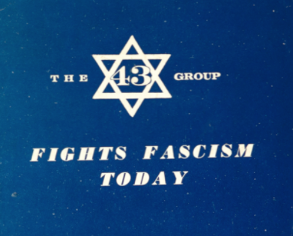 Part of the Library’s Spring Term educational talks and workshops.

In this talk, part of the Library’s event series for its Fighting Antisemitism exhibition, Senior Curator Dr Barbara Warnock will explore the development of antisemitism in Western Europe from the late nineteenth century to today, and the means by which Jewish organisations and other groups have fought back against antisemitism. The talk will draw upon The Wiener Holocaust Library’s collections of material on antisemitism in Weimar and Nazi Germany, British fascism in the 1930s and beyond, and the struggle against fascism and antisemitism. The talk will cover the efforts of The Wiener Holocaust Library’s predecessor organisation in Germany, as well as those of other organisations, such as the 43 Group, formed by primarily of Jewish ex-servicemen and women after the Second World War to fight back against the resurgence of fascism in Britain, and look at the work in this area of the Board of Deputies of British Jews and the Community Security Trust.