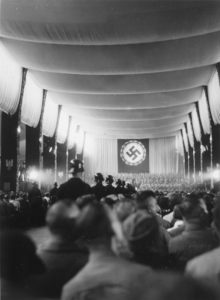 Propaganda played an important role in the Nazi Party’s rise to power. Rallies, like this one pictured, were an important way of spreading the Party’s ideas. This particular photograph was taken at a rally in Nuremberg in 1934. Wiener Holocaust Library Collections.

Part of the Library’s Autumn Term educational talks and workshops.

This talk, aimed at GCSE and A-Level students will utilise sources from the Library’s unique archive to examine the Nazi rise to power. It will explore the aftermath of the First World War, the role of the Weimar Republic, the early years of the Nazi Party formation and how the Nazis ultimately consolidated their power.