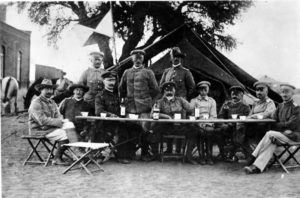 In the late nineteenth century, Germany rapidly acquired an overseas Empire that included substantial territories in Africa, such as modern-day Tanzania, Burundi, Rwanda, Namibia, Togo and Cameroon, and, in the Pacific, Papua New Guinea, Samoa and the islands of Micronesia. The German colonial Empire became the third-largest global Empire and ​its territorial possessions were then ​confiscated after Germany’s defeat in the First World War. The brutality of German rule in parts of its ​empire, notably during the genocide of the Herero and Nama in Namibia from 1904, but also elsewhere, can seem to foreshadow the events of the Holocaust.

Jürgen Zimmerer is Professor of Global History at the University of Hamburg/Germany. From 2005 to 2017 he served as Founding President of the International Network of Genocide Scholars (INoGS) and from 2005 and 2011 as Editor/Senior Editor of the Journal of Genocide Research. His research interests include German Colonialism, Comparative Genocide, Colonialism and the Holocaust, and Environmental Violence and Genocide. He is the author and editor of ten books and journal special issues, including “German Rule, African Subjects. State Aspirations and the Reality of Power in Colonial Namibia”, which will be out in June 2021.

Sara Pugach is a Professor in the Department of History at California State University LA. Her research focuses on the tangled interconnections between various African countries and Germany in the nineteenth and twentieth centuries. In 2012, she published Africa in Translation: A History of Colonial Linguistics in Germany and Beyond, 1814 1945, and her co-edited volume, After the Imperialist Imagination: Two Decades of Research on Global Germany just appeared in 2020. Her next book, African Students in the German Democratic Republic, 1949-1975 is due in 2021.

Adam A. Blackler is an assistant professor of history at the University of Wyoming. His forthcoming book, currently titled An Imperial Homeland: Forging German Identity in Southwest Africa, will appear in the Max Kade Research Institute of Pennsylvania State University Press’s book series, “Germans Beyond Europe.” Among Dr Blackler’s most recent publications include a co-edited volume, entitled After the Imperialist Imagination: Two Decades of Research on Global Germany and Its Legacies (Peter Lang), and a chapter, entitled “The Consequences of Genocide in the Long Nineteenth Century,” in the book series “A Cultural History of Genocide in the Long Nineteenth-Century” (Bloomsbury Press). He is presently researching a book project that explores the vibrant topography of Berlin’s parks, market squares, streets, and municipal districts before and during the Weimar Republic.