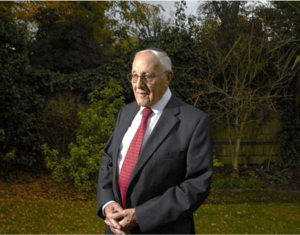 For the final event in our Death Marches: Evidence and Memory event series, we are delighted to be joined by Holocaust survivor Manfred Goldberg BEM. Mr Goldberg will be led in conversation by Professor Dan Stone, one of the co-curators of the Death Marches exhibition, and share his experiences of his own death march journey and liberation. There will also be time for an audience Q&A.

Manfred Goldberg BEM was born on 21 April 1930 in Kassel, Germany, into an Orthodox Jewish family. His father escaped to England shortly before the outbreak of war; Manfred, his mother and younger brother, Herman, were deported to the Riga Ghetto in 1941. In August 1943, just three months before the ghetto was finally liquidated, Manfred and his mother were sent to a labour camp, where he was forced to work laying railway tracks. It was during their internment here that Herman disappeared one day, and was never heard from again. As the Red Army approached Riga, Manfred and the other surviving prisoners were evacuated to Stutthof concentration camp near Danzig (today Gdańsk) in August 1944. He spent more than eight months as a slave worker in Stutthof and its subcamps, including Stolp and Burggraben. The camp was abandoned just days before the war ended and Manfred and other prisoners were sent on a death march in appalling conditions. Manfred was finally liberated at Neustadt in Germany on 3 May 1945.

Professor Dan Stone is Professor of Modern History and Director of the Holocaust Research Institute at the Royal Holloway University of London. He is a historian of ideas who works primarily on twentieth-century European history. His research interests include the history and interpretation of the Holocaust, comparative genocide, history of anthropology, history of fascism, the cultural history of the British Right and theory of history.

Please note: This event will take place on Zoom and the relevant details will be sent the day before the event. Please ensure email addresses ending in ‘@wienerholocaustlibrary.org’ are added to your safe senders list.