Home Events Exhibition Talk: We Fight Fascists: The 43 Group and their Forgotten Battle for Post-War Britain

Exhibition Talk: We Fight Fascists: The 43 Group and their Forgotten Battle for Post-War Britain

Part of the Library’s Fighting Antisemitism from Dreyfus to Today exhibition series.

In this event, Daniel Sonabend, historian and author of We Fight Fascists: The 43 Group and their Forgotten Battle for Post-War Britain, will tell the story of the militant Jewish anti-fascist organisation the 43 Group. 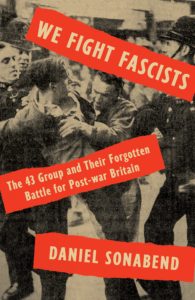 In the immediate aftermath of the Second World War, Britain’s fascists, led from the shadows by the pre-war fascist leader Sir Oswald Mosley, sought to resurrect fascism in Britain. As part of this work, they began holding outdoor meetings on street corners around London, often focusing on areas with large Jewish populations. London’s Jews came under attack once again, as many were harassed by gangs of fascists and Jewish properties were attacked and vandalised. Outraged that the British state was allowing this to happen and the Jewish establishment was barely kicking up a fuss, Jewish veterans who had just returned from fighting Nazism on the continent realised that their days of fighting were not yet at an end. In 1946 they formed the 43 Group of Jewish Ex-Servicemen, an organisation dedicated to active and direct confrontation with Britain’s fascists and anti-Semites. For the rest of the decade, they waged an often bloody street war against Britain’s fascists, taking the fight to them wherever they were and eventually beating them off the streets and back into the shadows.

The 43 Group was the first organization of its kind in Britain and theirs is a fascinating story full of character, drama, and indomitable spirit, which Sonabend brings to life in his talk using photographs and interview footage of veterans of the Group.

If you are joining us online: